Unilever claims that this video made by Oglivy is the most viewed viral ad in history, generating around 150 million views on its first month of release.

Just this morning, as I was browsing through the net some visual inspirations to fuel my hump day, I came across this genius campaign made by  a Dutch outdoor advertising company, Interbest. They used a male stripper to build awareness of their billboard visibility in a campaign that has won Gold at the 2011 Clio Awards. The campaign involved a progression of billboards each showing the overweight man in fewer clothes with the text: “The sooner you advertise here, the better”. Just in time, the billboard is taken up with an advertisement for Radio 2, BBC’s national radio station. The campaign is a development of an earlier series of billboards which won a Silver Outdoor Lion at Cannes in 2010. 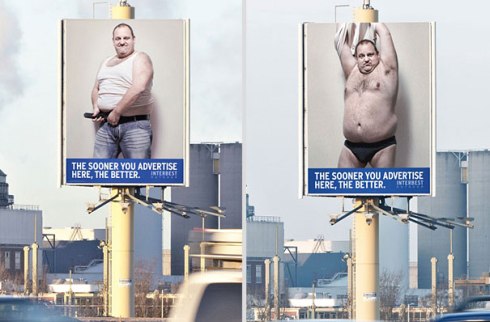 You could enjoy that Big Mac in the peace and artery-clogging quiet of your local McDonald’s, or you could just catch the next flight to Stockholm, where Ronald apparently serves his meals with a side of interactive, outdoor gaming. It’s all part of something called Pick n’ Play — a new (and pretty ingenious) ad campaign that invites pedestrians to play a game of Pong on a giant Mickey D’s billboard, using only their smartphones. All you have to do is stand in front of the display, log on to Pick n’ Play’s site from your handheld, and wait for your phone to verify your location. From there, you’ll have to manipulate an onscreen paddle using your device’s touchscreen, while doing battle with a game that gets increasingly more difficult. Last thirty seconds, though, and you’ll get a free, lipid-drenched treat of your choice, courtesy of the Golden Arches. Best of all, you won’t even have to download an app to get your Pong on — putting you one step closer to that coronary you’ve always wanted. Trot past the break to see it for yourself.

All of us are witnesses that advertising industry is getting more inventive and creative in their campaigning each day. People from advertising industry tend to try to attract our attention in every way possible: sometimes their efforts are meant to disturb you or to stir emotion, other times they make all kinds of jokes and funny images. No matter what is the case, they intend to leave you touched and make you remember images and messages they sent you and the best way to do that is to place their ads on places where we have no choice but to notice it, one is an elevator. Enjoy!

500,000 – The expected number of people who takes MRT everyday as their means of transport. And well, with this quantity, expect the worse. If you have read my previous Etiquette and the people you don’t want to meet on the MRT blog, you would surely agree and have a different look with it.

Well, such numbers might be bad news for us, commuters, but for an advertising genius, the more the merrier! Crowded public transportation is fast becoming a marketing venue for advertisers to explore. Here are some cool transport handles that will surely get your attention…

People involved in advertising industry mostly dwells on two factors; having a concept and the next big thing, well the more complicated one, considering a budget. One of the oldest form of advertisement is a tear-off. If you haven’t seen or even at least heard one, well, these are simple and cheap form of ads where literally a piece of it tears off, which usually contains essential information. Here are epic samples of the simple ads executed in an extra-creative manner. I hope it would help to get your creative juices flowing on a Tuesday. Stay inspired!

If you are living in Manila, and your daily routine requires you to pass along C5 road (you’re lucky if not), then most likely aside from the horrendous traffic, you are familiar the sky-high giant billboards covering everything. Passing it seemed like browsing through a magazine, and you are rendered helpless but to look at em’

Billboards are one of the most powerful means of advertising. I have come across some creatively rendered ads for you to be inspired.

In Indonesia, Ogilvy & Mather created for Formula Toothcare a creative billboard showing a man trying to rip it with his teeth. The ad is an attempt to convince people to build better teeth by using the toothpaste brand of the company. Even though we don’t know whether it worked to drive up sales, we are sure that it caused people to have a wider smile.

Here is a unique way to remind people to buckle up in the back seat. Created by Clement BBDO in Austalia, this billboard displays a huge slingshot in 3d which appears to propel a passenger into the air. The message is clear, belt up or your body will be slinked.

Masterfoods worked with Colenso BBDO to encourage the consumption of chocolate during the summer months. The creative team came up with the concept of a product so cold it would affect the body’s extremities..

“Coca Cola” – is there something more to say?

You can literally see through the tops whenever it gets wet. Playboy billboard promoting its online services in Germany – self explanatory.

AMV BBDO become the biggest agency in the UK. They work with 73 brands and have one simple aim with all of them: to help solve their business challenge with creative ideas that change the competitive landscape. This piece from AMV BBDO for The Economist won a large number of awards back in 2004 including Gold in Eurobest, for Publications & Media for their bright concept. The billboard shows a light bulb that illuminates whenever someone walks underneath it by hooking up a motion sensor. Brilliant idea, let’s just hope it doesn’t rain!

A volume billboard imitating the consequences of a car accident. Amélie Company.

This billboard is one of the most creative advertisements found on the highways. Created by Bic, it shows a giant razor that shaves the grass all the way up to the billboard portraying the image of a powerful razor. Except for the constant trimming of the lawn, this advertisement looks very effective.